have you met Cornelius the Wonder Turkey yet? Okay, that isn't his real name (it's just Cornelius -- or Corno/Corny for short), but I'm hoping he'll prove to be as wonderful an ambassador for turkeys as Esther the Wonder Pig has been for pigs. Because it's that time of year when turkeys, though slaughtered and consumed by millions, are essentially rendered invisible. Sentient and smart and social as they are, they're horrifically reduced to single body parts and not given a second thought.

That is, until folk get to know a turkey personally or virtually (as they have come to know pigs through Esther), and realize they don't want to eat someone as classy and sassy as Cornelius. And that gives me hope. Statistics rarely sway, and numbers that are too big to fathom, too big to relate to, are easily dismissed. But the power of one is almost always more effective in changing hearts and minds. When people start seeing an animal of another species as having a personality, as having their own quirks, and having social connections much the same as we do, then it's harder not to recognize that they have feelings and would prefer not to be eaten. Or be deprived of the ability to live their natural lives with their own unique behaviours.

So go, Corny, go! Show people worldwide how fabulous turkeys really are. Show us your true essence, and help educate people in ways that we mere human mortals too often fail to do. Be the Wonder Turkey that so many of us know you to be. :) 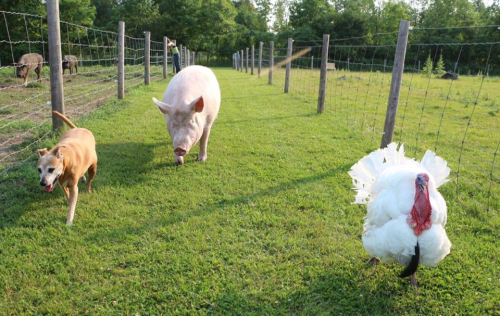 p.s. gosh, I haven't written regularly in a long time -- hope to remedy that soon!