Is pretty much how I feel the year has started:

Jan 1: spouse of sibling leaves sibling without notice and asks for separation
Jan 2: back to work to an outbreak that lasted for more than three weeks
Jan 3: the mom of an old friend passes away
Jan 11: without any notice our house is put up for sale by landlord
Jan 19: group of SIX inspectors, realtor, buyers inspect tenant units
Jan 20: world somehow continues to spin on axis as man-made disaster enters WH
Jan 21: a solid bright spot as millions protest this ridiculous man-made disaster
Jan 23: house gets sold, tenant futures up in the air
Jan 25: Trump issues executive order to build his damn wall
Jan 25: Mary Tyler Moore, who gave us the iconic Mary Richards, passes away
Jan 20-?: possible futures of all earth's inhabitants up in the air as celebrity con man continues to demonstrate how supremely unqualified he is for the Oval Office
Jan 26-31: ?

Note: this post was first drafted Jan 25 and obviously, a lot has happened since then. Who knew that it would take less than two weeks for a power-hungry, profit-worshipping asinine asshat to unleash so much destruction? It makes "supremely unqualified" sound supremely understated. Let's continue the list:

While I haven't included every action Trump has undertaken on the above lists (a record number of executive orders, memoranda and proclamations to begin with), let's just say that we can safely summarize his administration so far as a threat to free speech, a threat to accurate information, a threat to women's reproductive rights, a threat to freedom from discrimination, a threat to the environment, and essentially, a real threat to democracy. Sobering, huh?

So yes, it's been a sucker-punch of a beginning. And the end result? I'm pissed. Pissed off at some of the things happening in my private life, and things happening in the public sphere. Work I can deal with, solutions to personal problems will be found, but the world at large continues to astound. Alternative facts? Ha! Feels more like an alternative universe, and my emotions bounce back and forth between anger, confusion, betrayal, shock, outrage, sadness, worry, fear, and back to anger again.

Clearly, my feeble plan as mentioned in my new year, old battle post of shutting Trump out of my sphere of attention ain't gonna work. Nor should it. He's proving to be too dangerous, and chillingly so, not only to America, but to every other country too.

How could we have gotten into this colossal mess? One of my favourite signs carried at one of the many worldwide women's marches on Jan 21 (it's not just Americans who are angry) was held by a woman who looked to be in her seventies or eighties, and it read I can't believe I still have to protest this fucking shit.

Indeed. She's my hero (along with numerous others including the future hero shown below), and I hope to still be actively fighting when I reach her age in a couple of decades or so, but yeah, frustrated that issues fought for long ago are resurfacing. I mean, really? We still have to convince folk that women's rights are human rights? And what especially annoys the crap out of me and saddens me to my core is that we're still needing to convince other WOMEN (young women to boot!) of this fact. It's nothing but shameful. Note: many people took to the streets in shows of solidarity after the Muslim ban to demonstrate that, unbelievably, we still have to convince those in power that you can't discriminate based on things like religion or ethnic group. Unreal. 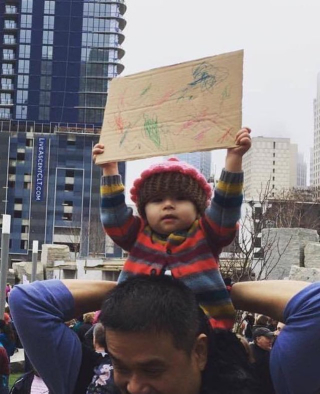 So at the moment I'm angry at my landlord, disappointed in my sibling's spouse whom I got along with so well, angry at everyone who didn't vote in the election, angry at anyone who decided to vote for doofus Donald (I'll never call him the P word, petty as that may be) despite his showing his true awful colours, angry at the Electoral College system, angry at all the horrible members of Cabinet who now have power and who'll use it for worse, angry that the whole election cycle has unleashed and legitimized sexist and racist bullshit that at least people sensed was wrong before, angry that monumental effort will now have to go towards fighting what should have been resolved eons ago, angry that this legitimization of nasty attitudes and behaviours has spilled over onto other countries, and angry that as a resident of Canada I feel drawn into this political circus.

But drawn in I am, and for good reason. The spillover effect I mentioned earlier has the potential to morph into global ramifications. Other countries are poised this Spring to vote in more leaders with alt-right views, and even here in Canada we have the spectre of a celebrity (of sorts) running for the leadership of the Progressive Conservative Party without any political experience, and someone who does have experience but also unabashed Trump-like ideals and goals (we should be screening immigrants for Canadian values, she says, for example). Sickening. Note: a specific example of the spillover effect occurred on Jan 29 when a white Trump-admiring nationalist killed six Muslims peacefully at prayer in a Quebec mosque. So, what do we call a person who inspires terrorism in others? A terrorist? An accessory, at the very least?

Where has some of my anger taken me to? Social media of course. Because what better place to express one's raw, unbridled, and unfiltered anger? What better place to advocate when you're angry and feel too many people are immature stupid clods? Exactly, sigh. So the title of my next post will be How NOT To Be An Effective Advocate. Let's hope I learn a few things from it myself.

Finally, I'm disappointed by the relative silence of otherwise-vocal vegans on social media when it comes to the current political turmoil. Yes, continue to advocate for other animals, but don't ignore human ones. Being vegan isn't about eliminating animal oppression only; it's about eliminating oppression, period. It's not a matter of picking which group of oppressed beings to focus on, but trying to dismantle oppression itself: the root cause of ALL isms.

What will February bring? I'm actually afraid to find out, but resistance is necessary, so here's one article explaining How to Resist Trump Without Losing Your Mind. Good luck, I have a feeling we'll need it.

Can you believe 2017's here? At the beginning of each new year I like to start with an encouraging/optimistic post, and my favourite of that kind is one I sometimes feel could be reused every year. This year, however, no such post is bubbling up.

I'm still struggling with the disappointment of the US election and the reality of the Donald being in power, and I resent the fact that December 19 (the anniversary of my cat's death) will now always be linked to his official election by the Electoral College. My antipathy towards this doofus was made clear in prior posts, and while you may wonder why the election of an American president would bother this Canadian resident so much, it's because I fear that social justice for all creatures will take a huge step backwards. His cabinet picks so far bear this out.

I will outline why the election was a bad one for animals, and then hope to be done discussing this despicable man once and for all. It's the only way I can cope I'm afraid, and as childish as this outlandish man is himself, I may have to resort to shutting my eyes and ears whenever I hear his name on any kind of media. I know, that means I won't be hearing or seeing much over the next four (two?) years, snort.

Stress and sadness over other non-political issues have also been key this past year, and while I posted earlier about burnout, acknowledging and addressing it are two different things. I hope to recover a bit more joy and enthusiasm before year's end, write the posts I've been meaning to, and focus on how to be a better advocate, because sometimes I feel that my having been vegan for the past eight years has accomplished diddly squat for those I'm fighting for.

So, who has Donald picked so far and why is that bad for animals, human and non-human alike? Well, in a nutshell, and with few exceptions, Trump has surrounded himself with old, ultra-rich white men who have shown no interest in protecting the environment, animals, or humans who don't fit their own demographic. Far from draining any kind of swamp, Trump is simply making it swampier and more dangerous for those who don't look like him.

Flooding the swamp he promised to drain with people who are anti environment, pro oil, pro gas, climate-change skeptics, pro big business, pro animal agriculture, pro factory farming, anti animal-rights, and anti public health care folk who tend to see everything in black and white, they wouldn't recognize a nuance if it bonked them on the head. The only regard they seem to have is for dollar signs. To people, sentient beings of all kind, and the planet itself, they're saying a big FU.

Trump's own two sons show complete disregard for wildlife by participating in the "sport" of trophy hunting, something that Donald is actually proud of. And given that the elder Trump is babysat by his own kids, their influence on his stance where animals are concerned can only be suspect. No, I'm afraid that the trumpnoxious (Trump-style brand of obnoxniousness) President-elect, his silly trumptirades (usually conducted on Twitter), and his downright scary-as-hell cabinet picks are filling me with nothing but trumpidation (the specific trepidation felt by almost everything the Trumpster says and does). The only silver lining is that perhaps things really do have to hit a rock bottom we didn't even envision before the world wakes up to the nightmare that the human species has created.

The stakes have NEVER been higher. And if we thought it was a battle before to have the rights of sentient beings recognized and respected, to have veganism be more than a scoffed-at movement consisting of a few, than I would say it's looking more like a war. As I said, I don't feel particularly encouraged or optimistic right now, and that's something I hope will change over the course of this year. In the meantime, let's all soldier on, because every single living being is counting on us.

Not a great way to begin the year and end this post I know, so please reread my way-better-way-to-begin welcome of a few years ago. :)