how to get through Thanksgiving without killing anyone ;)

Obviously, most readers (all, one would hope) of this blog are already down with not killing turkeys or geese or ducks or chickens or any other sentient being in the perverse tradition (yay, we're so thankful, let's go kill something!) that this holiday is usually celebrated in, but this year it may be a tad more difficult to get through the occasion without harbouring thoughts of perhaps doing in your table-mates. Well, it would be for me if I lived in a particular country right now. I don't, and luckily in Canada Thanks-taking is already behind us, but if the situation were different...

I'm referring, of course, to the polarizing US election in which a certain doofus was deigned to be fit for the most important position of the land by about half of its voters. Clearly, I believe their vision and decision was murky at best and catastrophic at worst, and am still upset by what happened. So I can well imagine how folk who actually have to live with the wannabe autocrat in their midst, and the voters who put him into this seat of power, feel.

Now, I'm NOT advocating for violence (cuz that wouldn't be the vegan thing to do), but given that I'm probably more short-tempered and less forgiving than most, I thought I'd let you read a post that made me laugh, and may just help American compatriots who aren't looking forward to supping with certain others tomorrow. :)

Here are some wise words on how to survive this year's Thanksgiving by Marla Rose, the Vegan Feminist Agitator: post-election advice for Thanksgiving. Enjoy. 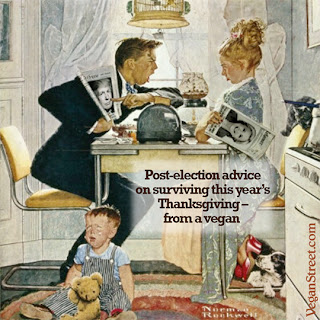 twas the day after the election

‘Twas the day after the election, when all thro’ the world
Not a sane person was happy, baffled at what had just unfurled,
All hopes had been dashed, even though nurtured with care,
As citizens realized that civility is rare:
A bigoted narcissist is what some Americans wanted
So Donald took advantage and remained undaunted.

And Hillary in her disgust, and Bill in his shock
Tried as they could to take clearer stock—
Because what had happened to cause this great rift?
This division of values, and misunderstood drift?
Racism and sexism held too many in its grip,
And that only bolstered Trump’s ugly ego trip.

Sure, some men might have cheered Donny boy on
But what could cause women to fall for this con?
And gays and minorities of all stripes and colours
Surely they saw through his worshipping of dollars?
So a sad world watched as obnoxiousness was rewarded
And learned the lesson that you can’t always clean something sordid.

no one wins November 8

Sure, someone will be elected, but with fierce opposition shown to both candidates, winning isn't the right word to use when half the American population will be pissed off no matter which person gets in. The elected candidate doesn't win, the lampooned parties both left and right don't win, and the people who are supposed to be the beneficiaries of democracy certainly won't win. Neither do the folk in other parts of the world held hostage to whatever decisions the incumbent makes. Global security and global economics are not factors to be taken lightly anymore.

The other big losers in this election? Civility, decency, maturity, critical thinking skills, and empathy. And if anyone was foolish enough to think that racism and sexism were non-issues, this election brought out both to the forefront. Sexism, especially, reared its ugly head enough to be a central defining feature. Hillary Clinton doesn't smile enough and she's perceived as cold. Seriously? No, I mean, SERIOUSLY? When was the last time any male politician running at any level of office was admonished for not smiling enough? Accused of not being warm enough? And held accountable for offences committed by their spouse? Doesn't make any sense, unless of course a candidate is thought of as merely an appendage to that spouse. (Note: this doesn't mean Hillary isn't acutely flawed herself, or that Bill shouldn't be held accountable for the allegations of abuse directed towards him.)

A good test of sexism is to reverse genders and see if the same standards are held. Picture Clinton saying or doing any number of the offensive words and actions Trump indulged in almost daily, and imagine how long her campaign would have continued. Remember the ridicule Sarah Palin received (and rightly so) for her extreme lack of knowledge? Yet Trump was allowed to continue full steam ahead.

But the most jarring thing for me personally during this election was the downplaying of sexual assault. Being accused by more than a dozen women with credible stories doesn't disqualify one from becoming President. Words don't matter (dismissed as locker room banter), but actions don't either. That we shouldn't take sexual assault seriously was a lesson of this election. So, I take it back. The one clear winner no matter who's elected on Tuesday is misogyny. And depending on the election result, women's reproductive rights, gay rights, and transgender rights are all up for grabs. How sad, and how damn scary. Doesn't feel like 2016 to me at all.

Never before has there been so much palpable anxiety outside of America about who will be elected, because in a world that is now globally connected in so many ways, everything is at stake. But I feel badly for Americans who don't support Trump, yet who may have to live with the consequences right at home. I can only imagine their fear, worry, dismay and disbelief. It's not much of a consolation, but please know that your feelings will be shared worldwide.

Dark times are indeed ahead, and like many people, one of my defense mechanisms for dealing with unpleasantness is humour. So here is my adaptation of part of a beloved Christmas carol for this can't-look-but-can't-look-away-either occasion. :)

Twas the Night Before the Election

‘Twas the night before the election, when all thro’ the world

Not a sane person was sleeping, anxious to see what would unfurl

All expectations were lowered with a sigh and a scowl,

In hopes that a defeated Donald wouldn’t make anyone howl;

But "deplorable" supporters stashed guns in their beds

While visions of revolution danc’d in their irrational heads.

And Hillary in her grief, and Bill in his fear,

Had just settled their brains in case things got near—

When out on social media there arose such a clatter,

People sprang to their devices to see what was the matter.

Tore open our emails (yes, EMAILS!), and threw out the trash.

Except for one message, a beacon for sore sight,

And the only thing that could save just about everyone tonight;

Proclaiming the election a bad series of jokes,

Donald himself admitted to being nothing but a hoax.

So the weary world watched as Americans voted

And hoped never again to see anything so vile and bloated. 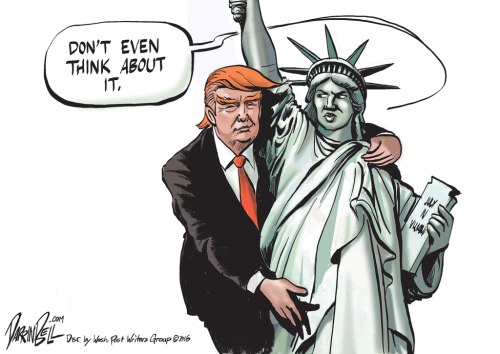