"We interrupt this program..." 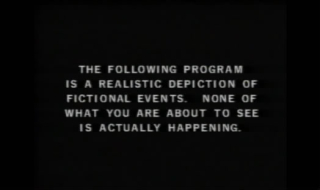 I'm sorry, I know this may not be the right place or time or even any of my business, but I just can't keep quiet any longer. Because certain events, even if they don't directly relate to veganism, or where I live, need to be discussed. I'm talking about the upcoming event that has already seen extensive discussion, and could have an impact on almost everyone no matter what country they live in.

I'm talking, of course, about the US election in deciding who is more qualified to be the next President. And the fact that some are having difficulty deciding "who is more qualified" is leaving many outside of the US nothing but gobsmacked. Worse, how did it even get this far? Because it sure makes me wish the words in the above graphic were true. Unfortunately, the most apt word to describe this election is surreal.

But let me back up for a second. First, I realize that I may offend some readers with this post, and for that, I want to apologize in advance. Second, I don't remember any election in any country getting this much international attention, which I think indicates what's at stake for countries even far outside of the US, and why so many of us are also invested in the outcome.

Note: the above was first drafted October 2, and sadly, enough has happened since that time to make the word I used to describe the election an antiquated understatement. Other suitable terms or phrases could now include any of the following: train wreck, nightmare, freak show, vile, offensive to the core, ugliness like never seen before, and unprecedentedly dangerous.

So at this point I was originally going to talk about why people outside of the US are baffled by how a non-politician with inferior verbal skills could have progressed this far, how Donald isn't a suitable candidate by almost any measure, his apparent symptoms of Narcissistic Personality Disorder and what that could mean post-election, how much of what he says is demonstrably false, the deep-seated sexism evident in this particular election (and that was before the video scandal even!), and the question of how Americans could possibly even want him representing them.

But some of the arguments for those points, I believe, have already been adequately shown by Trump himself and his core followers (and articulated by others already), so I'm going to venture down a different path instead. I'm going to talk about something that links this post to veganism.

Let me back up again for a bit. I'm sure I'm not the only one who has been watching this circus of an election with a reluctant but compulsive and fascinated revulsion. Kind of like a bad car accident, but one that seemed completely preventable, and one that involves this car crashing again and again and again.

One difference though is that for a while I was actually quite angry with Americans as a whole, which given that I live in Canada doesn't make much sense. But maybe it's because Canada finally got rid of a prime minister last Fall whom I also couldn't stand (a right-wing robot who denied climate change and didn't have much respect for women, but was a lot more polite and sneaky about it), and/or because this American decision could have a global impact like never felt before.

At some point though I realized it wasn't fair to blame all Americans (besides it being childish), so I redirected some of that annoyance at Trump followers instead. So being curious about how people could support and believe an individual for whom I have nothing but contempt, I began to read his Facebook page in an attempt to better understand what I considered seriously duped folk. And I quickly realized that these people are just as genuinely perplexed at how anyone could support Clinton. Are just as convinced that this individual is not a good person, does not represent the average American, and that electing her to office is not only foolish and preposterous, but also downright dangerous. Well!

I've seen the question asked several times now what it is that Donald could say or do that would convince followers he's unqualified to be POTUS, and the answer is always nothing. (Now while I would like to believe that Clinton supporters WOULD draw a line if unacceptable words or actions became known, that might not in fact be true.) The point here though is that I'm exactly the same as those who support Trump, in that nothing that anyone says or does could convince me that Donald isn't the absolute worst candidate ever, and that if the unthinkable does occur, questioning the election result shouldn't be out of the question. 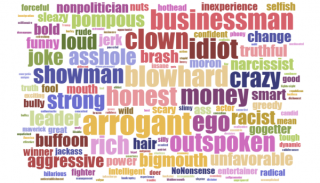 So what does this have to do with veganism you ask? Well, this reminds me strongly of the sometimes warlike attitude of activists within our own movement when we disagree with each other, and the difficulty we have when what seems so clear and obvious to us, is dismissed by those who still consume other animals. Just give them information, we say, just open their eyes, let the slaughterhouse walls become glass and they'll see what's apparent, they'll see what's right. It IS hard to understand why others can't comprehend what we do, and it's tempting to view them as ignorant or wilfully cruel or any other number of uncharitable things.

But as I'm slowly learning in this election (as late as it is in the cycle), it helps to start asking the right questions. What do core supporters see in Trump? What is he appealing to that goes beyond the automatic charge that any vote for Trump is a sexist vote and/or a racist one?  How does the Clinton campaign not serve the ones who truly think of her as evil incarnate? What in their real lives stands in the way of being convinced by her campaign?

And just as with veganism, how much of a role does confirmation bias play? How do we accept or dismiss information that may or may not concur with what we already believe? Or do facts not actually play a big role? Do we just believe what we believe, and align any new data accordingly?

With this particularly difficult election (because it must be hard if you dislike both candidates), what factors DO you take into account? Is it important, for instance, to take into account past or present actions of spouses? Is political experience a necessary requirement? What standards do you apply?  And are those standards gender neutral? For example, is one candidate held to a much lower or higher standard than the other? Would the words or behaviour deemed unacceptable in one, be accepted in the other? My own bias is showing here, but is one candidate being given more leeway for acting like "a boy" (hard to believe this man is actually 70 years old), while the other is given a tougher time because they have the audacity to be ambitious enough to try and even play in a traditionally male arena?

Whatever happens next, I'm afraid that the chasm between the supporters of Clinton and Trump may not ever close. How can either person so reviled by the opposite camp be a force for unification? How can, in the same vein, abolitionists and pragmatists see eye to eye? How could an animal rights activist ever get along with a writer of ag-gag laws? Does the investment of Tyson into Beyond Meat, for example, set an example of somehow finding common ground? I don't know.

The main thing in this election though is not to be complacent, because Trump has tapped into something that would be unwise to ignore. Look at Brexit. Look at the rise in popularity of populism globally. In my own country of birth, for example, Geert Wilders seems to be Holland's mini version of Trump, and that country's election next March will be interesting to watch as well.

This talk of "Donald has lost already" scares me because there are enough people determined to get him in, and Hillary's victory isn't a done deal until every vote has been made and counted. Please do not "Brex" yourselves. And please, American voters, know that citizens around the world are paying close attention and waiting for you to decide what version of America you believe in, as it may affect us all. Thank you for listening.

p.s. I'm sure you can guess what I'll be viewing tonight. ;) 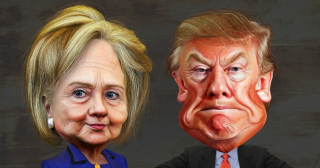 Tomorrow, Canada celebrates Thanksgiving. (Although in some ways, in my opinion, it may as well be called Thanks-taking for all the harm done to innocent beings.) And while last November I took a different (more generous?) approach when I talked about the occasion as Americans celebrated it, this year I want to focus on mercy. Or the lack thereof.

Because this past week has been merciless when it comes to animals in Canada, and even though it's Thanksgiving weekend, I'm still feeling more angry than thankful. As most of you may know, there was a horrible incident involving 180 pigs in a trailer rollover that left many vegans reeling. I don't want to retell the awful details (some of which you can find in the links posted below), but this incident (in many ways the word accident is insulting) demonstrated just how vile and merciless this industry actually is.

These posts will fill in the background for those not familiar with what happened, and provide good commentary for those who are:

On the same day that this travesty occurred, Bill C-246 (which would have updated Canada's antiquated animal cruelty laws) was defeated 198-84. This bill originally included things like changing the definition of bestiality, banning the import of shark fins, cat and dog fur, and making it a crime to profit from or breed animals for the purpose of fighting. This, apparently, worried supporters of hunting, trapping, fishing, ranching and medical research. So they said, essentially, screw animals.

My Houghton Mifflin Canadian Dictionary of the English Language defines mercy as "Kind and compassionate treatment of an offender, enemy, prisoner or other person [being] under one's power."

Where was mercy shown this week?

In fact, more mercy was shown by some of the injured and needlessly killed pigs themselves (this haunting photo and others was originally taken by Andrea White), toward each other: 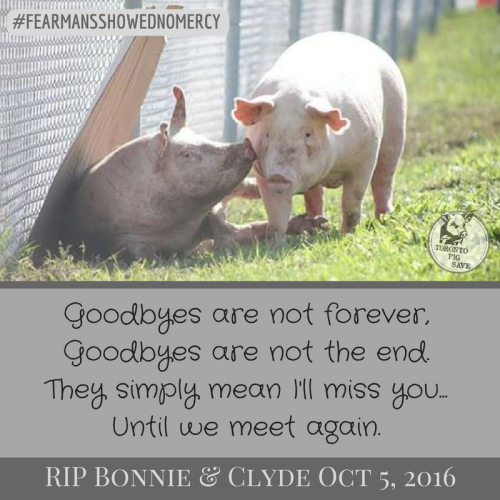 But I'm trying to remember that there ARE a lot of folk to be thankful for, and that mercy IS plentiful, as shown by:

I'm also thankful that I can virtually visit with Esther and other sentient beings. They give me strength, respite, resolve, and comfort.

Rest in peace, sweet pigs. We will NEVER forget you. 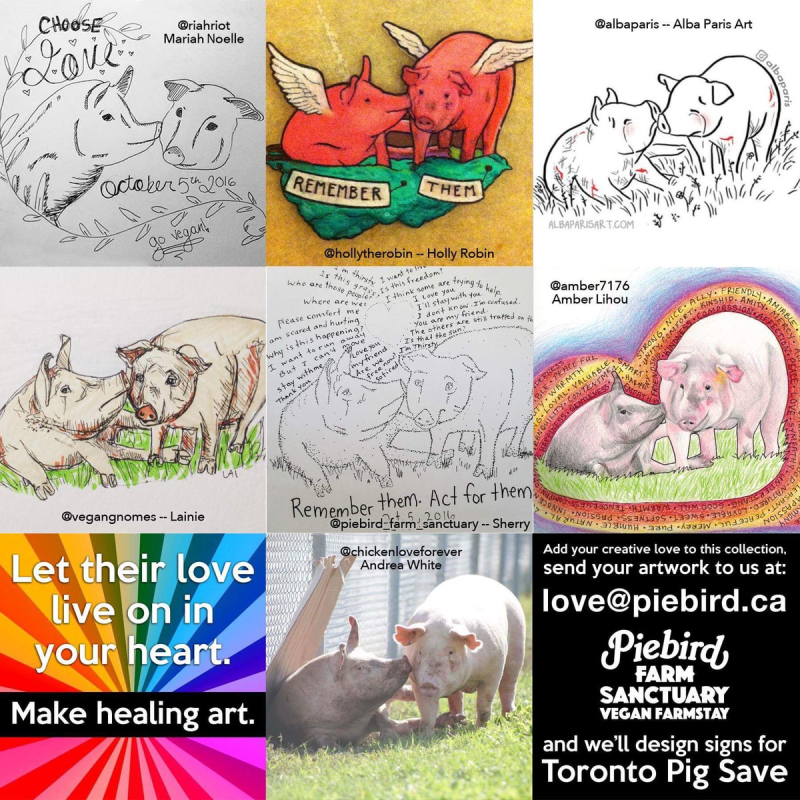