hug a vegan day (and other upcoming notable dates)

Today is Hug a Vegan Day, so consider yourself officially hugged! :) 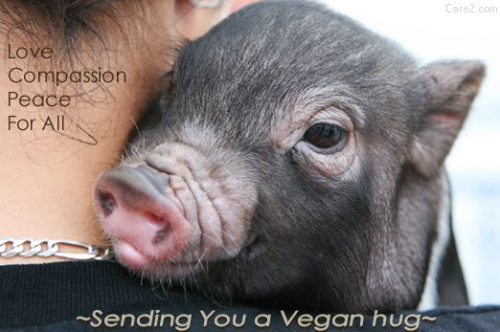 Spread the love and if possible go hug every vegan you know. Give yourself (and any farmed or animal companions nearby) a huge hug too!

This time of year is filled with occasions to commemorate, celebrate or even mourn, so here are a few to keep in mind as the weather finally and blissfully gets cooler:

Being vegan, even when it feels that progress is maddeningly slow, is the best gift you can give yourself, your loved ones, and even those you find a bit more challenging to love. The world IS changing, and we WILL get there!

* Ironically, the next court date for Toronto Pig Save's Anita Krajnc takes place the day after World Day for Animals on Farms, and the second court date falls right on World Vegan Day.

In my previous post on vegan burnout, I included a few links on self-care: assessment, top 12 tips, and 100 places to start. A hundred (or even twelve for that matter) is actually an awful lot to start, so I thought I'd share my latest way of self-care. (Some of my other self-care techniques include biking, scheduling reading as a daily task, and most recently, writing first instead of leaving it for last.) Vegan self-care is something that activists need to take more seriously, but if you find it difficult think of it as helping yourself in order to most effectively help others. Because a burnt-out vegan isn't of help to anyone, or to any movement.

So, what is my latest fave way of taking care of myself? Well, the title gave it away, but in two words: uphill walking.

Yep, I've been doing this for about four months now, three times per week, and I love it. And while I thought I was in decent-enough shape with all the walking, biking and even running around I do at work, uphill walking has had more benefits than I'd even imagined. Luckily, I live five minutes away from one of many roads going right up the Niagara Escarpment, so don't have to travel far to get a workout.

One of the things I enjoy most about uphill walking is its non-multitasking nature. All I have to focus on is putting one foot in front of the other until I get to the top. Sure, sometimes I try to walk off whatever anger or frustration I'm feeling, think through a blog post I'm writing, or when feeling mellow simply enjoy the peaceful quiet and trees surrounding me, but basically, my goal is to get to where the incline stops (about 20 minutes) and then return home. Step by step is all I have to do.

Besides increasing my heart rate to a level where it counts (bike riding doesn't do that for me anymore), and moving my legs so I can really feel them (walking on a level surface -- for however long or fast -- doesn't feel like exercise anymore either), uphill walking gives me more energy for the rest of the day, and helps me sleep better at night. And while I'm not vegan for health reasons, it's a nice bonus nonetheless.

But what I also appreciate about my newfound self-care component (and by now you've seen this coming I'm sure), is the metaphor it represents. Not so much the familiar a-journey-of-a-thousand-miles-begins-with-a-single-step metaphor (although that's a nice one too), but the actual journey of not only becoming, but also staying, vegan.

Making the decision to head out the door is a bit like making that initial decision to stop your usual routine of consuming other animals, and doing something different. Something healthier, something life affirming, and something that will be of benefit not only to yourself, but to others as well. And no matter how often I've climbed that hill by now, I know that the first steep incline is the hardest and requires a bit of an extra push. Becoming vegan can be like that too. You're out of your usual comfort zone, and it may take some extra focus to get started.

At some point, it gets easier though. Once past that first hill, or that first while of being vegan, it's not as hard anymore and you take some deep breaths (or a few gulps from the water bottle) and relax. You keep going though, knowing that the next incline is coming up. But this time it's easier because you've had a little practice, and you know you've succeeded before. You know you've got what it takes.

You also know better though than to underestimate that hill in front of you, that hill that someone just the day before told you they weren't able to climb and will no longer even try. But also that hill that undoubtedly someone else will climb (or run or bike) faster or with better technique. That won't let it deter you though, right?

The vegan path can be strewn with obstacles too. No one said it would always be easy (the most satisfying and worthwhile things seldom are), but it's definitely doable. Like uphill walking, you don't need any special equipment, and you can do it on your own or with like-minded others. After time it really does require less effort, but sometimes if you're not careful or paying enough attention, you stop putting that one foot in front of the other and no longer even get out the door. (I first started uphill walking about five years ago, but then after a few months got bored and for some bizarre reason decided that I wasn't getting much out of it in terms of exercise benefit. If it could speak, my now five-years-older body would say, Seriously? What were you thinking, you not-yet-bothered-with-any-kind-of-joint-pain upstart?)

Now I'm not sure if this metaphor is getting too muddled here, snort, but to stretch it a bit further, you may occasionally make a misstep. You trip or stumble, and oops, not looking closely enough, you managed to eat something without seeing the whey powder hiding in a long list of ingredients, or honey that you somehow managed to overlook. Does this mean you declare yourself unfit for the vegan label and give up the journey entirely? Of course not. This is not the equivalent, by the way, of deciding to order that hamburger or steak because your body has spoken and you've decided to listen to its supposedly wise counsel.

Then again, even if this were to happen, it doesn't mean you can't get up the next day and like the mature adult that you are, start again. One lapse doesn't disqualify you for life. Just as one missed day or week of uphill walking doesn't mean you should never exercise again.

But like exercise, veganism becomes more effortless when it's a habit. Not an unthinking done-by-rote habit, but a well-thought-out conscious decision to flex those physical AND compassion muscles. When you've decided in advance that you want to take care of your body and take care of other beings, it's no longer a choice you have to remake every day. You know what's at stake, you know what you want to do, and so you just do it. And if you fall, you don't make excuses, but you get up and start again. You keep calm, you keep vegan, and you KEEP GOING. :) 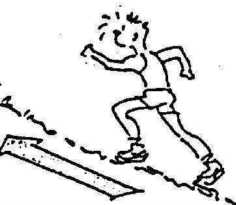 what every vegan should know about burnout (resource list included) 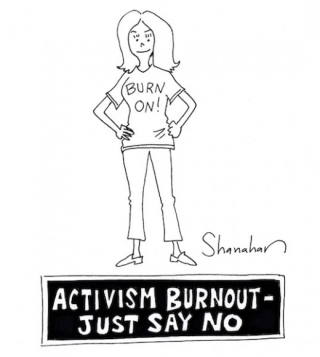 Which rather makes it sound like I have all the answers, but clearly I don't, otherwise I would've been able to avoid burnout myself. At least, I'm wondering if I've reached burnout given the tone of some of my previous posts (we-animals-deserve-to-rot-in-hell in particular), and my more-than-usual cynical mood of late.

For example, while I like the oft-used quote about slaughterhouses being made of glass walls, I don't think it's actually true, and in general think it's less a lack of awareness than an agreement that other animals are ours to use as we see fit mentality that's at play. Sadly, as long as animal use is profitable or pleasurable or both, a vegan world seems a long way off to me. On the other hand, I realize my the-human-species-as-a-whole-is-insufferable conclusion isn't really effective, and isn't going to help. And while the people-who-consume-animals-are-bad labeling syndrome may be tempting; it too is not strategic, and not likely to increase the number of vegans.

But, back to burnout. Is this a condition that every vegan can expect to face at some point? Given that I'm eight years into the vegan journey, should I be surprised or happy that at least it didn't happen sooner? Is it in part what can make a vegan become ex-vegan? (Thankfully, I don't anticipate that happening with THIS particular vegan at any time.) And is burnout the same as compassion fatigue? Are the two terms interchangeable? Nope, apparently not. Here's a helpful article outlining the difference between compassion fatigue, vicarious trauma and burnout.

In my own case, there's also a degree of caregiver fatigue thrown in, which makes me wonder if vegans acting as caregivers for elderly parents are even more at risk for burnout. It's a bit of a double whammy methinks, and given that most vegans and most caregivers are female, you could have fatigue coming at you from all sides. Actually, forget about double whammy. If you're female and part of the sandwich generation looking after kids and parents, AND participating in the labour force, you're likely looking at at least a triple or quadruple whammy, eek!

At any rate, since I don't have the answers that the post title implied I might have, I thought I'd look around and share what I find. Especially since if the statistics on recidivism are correct (I've yet to be convinced they are, but that's a topic for another post), and if some form of burnout precedes recidivism, then nearly most of us will face this battle at one point or another.

As with many other problems, prevention is always better than solving, but given the continual assault on the beings of our concern and the huge scale of what we're up against, I would say that it might be a big battle to prevent or overcome this too-common occurrence. Luckily, there ARE also many resources that can help, whew, so I've compiled a short-ish list (a long one can be overwhelming in itself if you're already stressed) and for convenience sake divided it into books, websites, PDF material, and articles. Take from them what you can, as other animals need us to be strong, resilient and healthy. As do other vegans! 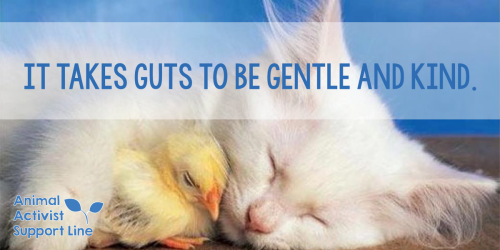 MY OWN FAVOURITE QUICK PICK-ME-UPPERS:

So there you go. That should be enough to keep all of us busy(ier) for a while, snort. Let's take nasty burnout, turn it inside out and nip it in the bud. Let's Keep Calm, Keep Vegan, and Keep Going. (Which is also my new motto and blog byline, woot!)