And while it might be annoying to hear them at first, they're actually a sign that you're successfully ruffling some feathers (should vegans still be using this idiom?) and upsetting the badly-in-need-of-upsetting status quo.

Yep, those words mean you've hit a nerve, made folk uncomfortable, defensive or angry, and are messing with their version of what's normal, natural and acceptable. These may include individuals around you, people online, industry representatives, members of scientific and medical communities with vested interests in continuing animal use, and anyone whose livelihood is threatened by what you stand for. But know that when you or your work is described by any of the words in the list above, you're making headway.

On the other hand, don't spend too much time with those bandying around the more inflammatory terms on the list, because that would be like trying to persuade ardent Trump supporters that the Donald really is NOT interested in helping anyone but the already wealthy, or that Hillary Clinton is not the devil incarnate herself. Good luck, snort. (Okay, sarcasm doesn't really help either, and neither does shaming.)

No, spend your time with those who are still open to facts, who haven't completely closed off the notion that other sentient beings aren't just things or property. Keep up the good work, the good fight, and remember what we're actually fighting for:

No animal wants to suffer. Every animal wants freedom, at the very least to perform its innate needs. We humans might value our own lives in a more intellectualized manner, but we all share a desire to live. To be with others that we care about. To be with family. To run, if we are built to run, to leap, if we leap, to swim, if we are meant to swim. A desire not to be slaughtered by a merciless hand. --Jo-Anne McArthur WE ANIMALS p200

we animals... (and another quick quiz)

Never has one book filled me with so much loathing for the human species.* And it's not that I'm unfamiliar with the information We Animals contains, so maybe it's the images, as gripping and often non-graphic as they are, that set me on edge. The book IS excellent, and I still highly recommend it, but unfortunately, it fills me with a disgust and despair that differs in degree from anything else I've read or seen. Maybe because it's so encompassing, detailing the numerous ways in which humans can be cruel, callous, and ignorant, that evokes my strong reaction. The result though, even after getting through a few more pages than before, is cursing so prolific that even I'm embarrassed, and a wishing of terrible things upon my fellow humans. Not exactly peaceful, or compassionate, and definitely not helpful.

It makes me wish that if there were an afterlife it'd be reserved for non-human beings only, as too many of them have already suffered a lifetime of hell in their too short, and too miserable, lives. It makes me wonder why the majority of believers are convinced they'll be going to heaven (is there anyone who actually thinks they're hell-bound, and what the hell is up with religious mobsters for Pete's sake?), and it makes me even more pessimistic than I already am. It makes me feel that there's no hope (which is why I have to get through these awful beginning chapters and get to the more hopeful ones), and that as long as humans are alive, animal exploitation won't end. It makes me think that only self-inflicted extinction of the human species (under a watchful/wrathful? eye of Mother Nature) will end the horror we inflict on all beings.

I'm assuming my reaction is not what the author was aiming for, and not what most readers have or will experience, so my response is likely not typical and that's a good thing. So for the sake of my blood pressure, temper, and indiscriminate ill-will toward other innocent and not-so-innocent human beings, I'll do what I often do in situations like this -- make a virtual visit to go see Esther and the rest of the HEEFS gang. A distraction no doubt, but probably better for me, you, and everyone else. :)

Oh, here's an interesting Essential Species Quiz and a post by the same author talking about misanthropy in a way that makes quite a bit of sense to me.

And if you think the word misanthropy should have no place in a vegan vocabulary, how else would you respond to this poor excuse of a human being who runs a whole hog barbecue restaurant called Arrogant Swine (choice words come to mind about both the name and concept, but I'm trying to be polite here), and had this to say about vegan barbecue:

"Vegan BBQ is as nonsensical of a term as pork-chop sushi or composing a garden salad out of candy bars," Ho said. "BBQ centers around the philosophy of contextual communal feasting. Smoked seitan is violently antithetical to that. Rather than call to mind the excessive feasting of laborers at the end of the fall harvest, it's an anemic dietary constraint. Rather than a celebration of abundance, it's a solution to a problem no one wanted solved."

Sounds to me like he's feeling quite threatened by the idea of vegans encroaching on his perceived territory, and is himself spewing nonsensical verbiage (um, philosophy of contextual community feasting?) as a lame defense of his repulsive occupation. But I don't want to end this post on a sour note, so here's a sweet image of how hogs and other animals could/should be treated -- as part of a family, human or otherwise. 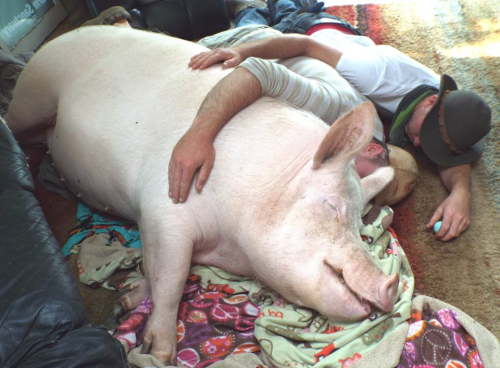 * obviously not all members of it, and I do recognize that some groups of members are more culpable than others...