"it's the humane thing to do"

A familiar phrase contested by few, and even heard uttered by fictional serial killer Dexter Morgan.

As you may know, I myself took my cat to the vet to be euthanized back in December because it was the humane thing to do. What I find fascinating though about the almost unanimous agreement with those six words is that it's widely considered okay to end an animal's life and suffering precisely because they're not human. Killing an animal is sometimes even performed when it's a matter of convenience for a guardian and when it has very little to do with suffering. In this instance the property status of an animal is most clear, but even when the deed is done for the right reasons, permission seems to be based on the fact that a companion animal isn't considered a person.

Which is odd when you look at the word "humane" itself. Broadly speaking, humane means showing compassion, mercy and kindness, so you would think that when a human being is suffering and wishes for their life to end, then humaneness would automatically include the human contained in the word itself. But no, that particular granting of ending a being's suffering and life is restricted to those whom society generally deems to be without personhood. It's okay to end the lives of companion animals because they're not people, and as many would argue, have no souls. It's not okay though to extend that same dignity to a being not considered as property. How is that not backward somehow?

Now the point of this post wasn't to get into a euthanasia debate as such, but its genesis was sparked by news that doctor-assisted suicide will be allowed in Canada as of February 6. Welcome news to me in part because of the suffering, decay and death that I saw my own father and stepfather go through, and still witness on an almost daily basis at work. And having come from the Netherlands where euthanasia (including physician-assisted suicide) has been legal for decades, I personally regard it as a dignified option for those who want it. Because if suicide itself is not illegal, why should assisted suicide be against the law?

But getting back to the concept of dignity, it still strikes me as peculiar that that is something we're willing to grant to beings whom we otherwise sometimes treat in the exact opposite way for most of their lives. They're given the legal status of objects and property, but if they're designated as "pets", then we can end their lives humanely without impunity. So why not give persons whom we supposedly value more the same consideration?

I don't get it. But maybe I'm not seeing things clearly.

a better year for many, I hope

it's a tough time of year for many WAS the title of this post I started on December 17. It was going to be about the extra exploitation (and increased deaths) that animals face during the holidays, the usual seasonal pressures and stress, and the specific anxieties vegans would have to face.

That was two days before I knew that the time would get even tougher for some of us. On December 19, I brought my cat to the vet for the last time. On December 22, a co-worker lost her dad. And on December 25, a resident in the home I work for lost his daughter, and a dear friend of mine had to say good-bye to HER cat. Too many deaths in one week, and especially heartbreaking on Christmas Day. Sadly though, there are always too many deaths on any day of the year.

I miss my kitty, although am grateful to have been graced by her presence for 14 years. The first week was especially tough as I felt her absence acutely, and slowly had to adjust to all the habits that no longer included her, and the tasks that no longer had to be done.  A book I had bought earlier that I felt might be useful in the future once my mom passed (The Geography of Loss by Patti Digh), I now read as a way to grieve for Kazumi. And one paragraph early on talking about how all of us have to cope with pain had me smiling:

This is true of Democrats and it is true of Republicans and libertarians and independents and hockey moms and socialists and communists and transgender men and women and lesbians and vegans and high school jocks and small children and that mean old woman who yelled at me in the library parking lot yesterday and unlovable people, too.

But this is January and I want to continue my tradition of beginning the year with a post that is at least somewhat hopeful or inspiring, because as vegans we know all too well that while too much death will continue to happen this year, we cannot let that deter us from trying to make change. So I want to include another quote from the book above that I liked:

The very least you can do in your life is figure out what you hope for. And the most you can do is live inside that hope. Not admire it from a distance but live right in, under its roof. -- BARBARA KINGSOLVER, Animal Dreams

And this from one of the most hopeful and optimistic vegans I know: 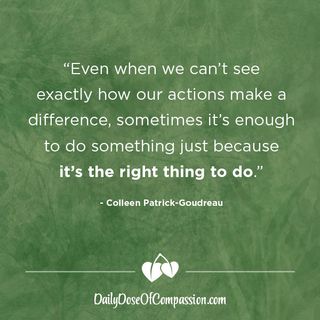 So let 2016 be a year where we can celebrate fewer animal deaths, and many more people putting peace on their plates and to-do lists. And lastly, a lovely and more proper New Year's post from one of the saner vegan voices out there: New Year, Same Old (Vegan) Me