the world's a strange place indeed

And an ever-changing one at that. A family situation has come up that will require even more of my time and attention, so I'll be taking a brief blogging break. Hope to be back by no later than the end of summer -- yikes, only about four more weeks! In the meantime, keep cool, keep calm, and vegan on.

Oh, a couple of thoughts, and one more it's-a-strange-world-indeed graphic. Enjoy, and see you soon.

Every successful social-change movement has involved a multiplicity of people using a multiplicity of tactics to approach a problem from a multiplicity of angles. Some people push against the bad things while others pull for the good alternatives. Some people work to undermine destructive systems from within while others are knocking down the walls from without. We all need to recognize that and find our place within a multifaceted struggle, being sure to be generous and appreciative of those who are working towards the same goal using different tactics. -- pattrice jones

Because I’ve discovered the secret to the best kind of activism – it’s whatever kind you actually do. -- Cassandra Greenwald 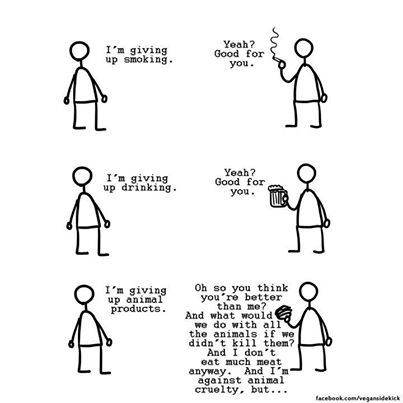 p.s. one last strange, sad and cautionary tale of how even some vegans can get it all wrong...

Because if you don't see how seemingly different types of oppression are similar and interconnected (that is, the roots are the same but the affected party may be different), then you won't be as effective in whatever advocacy work you're doing.

The above is part of a comment I left on a previous privilege post back in January, and is something that has fascinated me for a long time. That is, how folk can recognize their own particular form of oppression well enough, yet be seemingly privilege-blind when it comes to other forms. Before I continue though, I found an excellent article recently on what privilege really means, which I would encourage you to read because privilege by its very essence can be so damn hard to see, especially when we're the ones reaping its benefits.

(pausing while you finish reading)

While it may be tempting to think that once we recognize one form of oppression all the other ones are instantly easier to see, unfortunately, that's not the case. While some well-meaning vegans, for example, have been quick to point out that "all lives matter" when they see #BlackLivesMatter, do we really have the right to do this if we don't understand white privilege better, and recognize how we're complicit in a racist system? And how do you deal with or prioritize multiple oppressions when all of them have an impact?

Privilege and oppression can seem almost limitless, and perhaps they are. Are we all endowed with privilege blinders? I'm beginning to think so. Let me illustrate with a few more examples. One of the first labels I adopted and still wear is that of feminist. Considered a dirty and threatening word by far too many, feminism as its basic goal seeks gender equality. That's it in a nutshell. So why every single person isn't in favour of this concept baffles me. Wouldn't allowing everyone to be their true selves instead of conforming to rigid and outdated gender stereotypes be a win-win for all? (I'm not being naive here, as I realize that many individuals and institutions benefit greatly from inequality despite its high price.)

And while you would think that those who identify as feminist would seek equality for all women, this isn't always the case. Women of colour have often argued that feminism doesn't include them. Same for those who aren't middle or upper class. Some women who are sex workers say that feminists too often portray all of them as victimized prostitutes, rather than women who are choosing how they earn their income. There are also those who dispute that all pornography is automatically bad or demeaning. They would argue that it is sexism, not sex that should be demonized, and some feminists are making their own pornography. Then there are feminists who are accused of being transphobic, a claim that's difficult to refute when some of them insist that only women-born-women qualify as real women, and that only they should be granted access to women's and feminist spaces.

Another group that vegans often lament for not seeing the oppression of other animals are members of the LGBT community. And it IS frustrating when folk who legitimately fight for the ending of oppression based on sexual orientation don't feel there's anything wrong with oppressing beings who happen not to be born human, even though they have desires and relationships just like we do. But is it that surprising? Because you would think that those who are discriminated against because of orientation are more likely to support all other orientations. Not always.

While it may be better now, there was a time when identifying as bisexual would get you a lot more flak from those who didn't identify as straight, as from those who did. And while neither group particularly liked "fence sitters", it wasn't heterosexuals who were more committed to kicking you off. But even today biphobia is alive and well. How many bisexual characters are there on TV? How many have there ever been? And how many of those characters are misidentified, like Piper (on Orange Is The New Black) who's called ex-lesbian instead of bi? Notice also how most people think almost exclusively in terms of gay or straight, male or female, black or white. We're addicted to binary thinking, and don't seem to like anything in between. Gosh, how many times haven't you heard the phrase, you're either vegan, or you're not? ;)

As you can see, privilege and oppression are not simple at all. Certainly not as simple to understand and combat as just using words like sexism, racism and speciesism. And while everyone is likely marginalized in some way, please do realize your privilege if you can put check marks in front of white, straight, middle-class, cis (those who identify as the gender they were assigned at birth) or male. Just sayin'.