who says vegans don't have a sense of humour?

When I saw the comic below (many moons ago now), I burst out laughing. 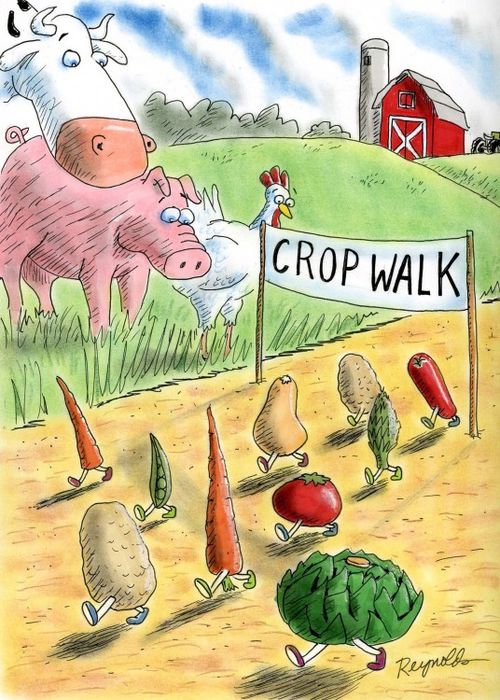 Funny thing is, it was posted on a decidedly non-vegan site whose author used this to illustrate the folly and error of vegan ways. Kinda backfired methinks, because when you show the absurdity of one concept (quick rule of thumb for the "but plants have feelings too!" folk -- if a carrot doesn't scream when you lop its top off, it likely can't feel pain), it can actually strengthen the argument for another. In this case, the idea of showing solidarity for farmed animals in the many animal walks now common in numerous cities and countries. Not quite sure if the illustrator was also trying to poke fun at us, but hey, we should all (vegans and non-vegans alike) be able to see the humour in whatever it is that we do. The stereotype though, that vegans are unable to do this, is one that's gotta go. Plus it's one of the cop-out ways to try and discredit a group or movement. Cuz you know, all those feminists don't have a sense of humour either. Or anyone who doesn't laugh at a rape joke. Humour can be a double-edged sword: used wisely it can educate while entertain, cutting through bullshit in mere seconds, but sadly can also be used to keep tired myths and progressive groups in place.

Something else that made me laugh a while back even though it maybe wasn't supposed to, was a comment made by a character on Coronation Street, the world's longest-running TV soap and one of the few shows I won't have interrupted. I can't quite remember the context (although I believe it was Kylie talking about food allergies), and I'm paraphrasing here, but basically the line went something like this: Some people can't eat cows, some can't eat pork, others can't eat shellfish, and don't even get me started on vegans. I'm not sure why this prompted a loud guffaw on my part, but I suspect it was the unexpected -- hearing the word "vegan" on a television show, even in a derogatory way, is still novel enough that it pleases me enormously. Veganism has become mainstream enough to be made fun of (remember that humour can be a defense mechanism and non-vegans have a lot to be defensive about), so like it or not, vegan jokes are here to stay. Until of course the tipping point is reached and what is currently considered a minority stance becomes a majority one. But until then, let 'em laugh, because you know the old saying, she who laughs last... ;)

Take a minute, and without thinking about it too much, quickly list all the different ways in which you're privileged. Better yet, do it out loud.

Now, did you find this relatively easy, or were you a bit stumped after the first couple of more obvious privileges? If you're like most of us, you were a bit slower in rattling off the last items you came up with, and that's not surprising given the nature of privilege. Privilege tends to be relatively invisible to the privilege-holder, that is, we often don't even see the advantages that come with the particular type of privilege we enjoy. And we all enjoy numerous privileges we take for granted.

If you are currently reading this post, then you enjoy heaps of privilege right off the bat. You have time, and are likely not working in multiple part-time jobs (or sweatshops) in trying to make ends meet. You have some kind of device on which you're reading these very words, and are probably living somewhere without Internet censorship. Almost certainly, you have some level of post-secondary education, or are self-taught. Already, as you can see, you are hugely privileged.

Statistically, many of you are enjoying gender privilege (it's easier, by the way, for vegans to pay lip service to the idea of being nonsexist than it is to recognize how certain approaches that value linear or black and white thinking, or reason over emotion, may actually be rooted in sexism), racial privilege, and heterosexual privilege. What may not be as easy to see is that you likely also enjoy gender identity privilege, Judeo-Christian privilege, and able-bodied privilege. If you fit the norms of whatever is considered attractive and desirable in your culture or society, than that's privilege too.

So right away, we have all sorts of privilege that we may not even be that aware of: gender, gender identity, class, racial, economic, technological, religious, education, orientation, and so forth -- it's a bit staggering, isn't it? Which isn't to say that anyone is completely privileged, as we're all probably marginalized in one area or another, and as with anything, it's a matter of degree.

But the one enormous privilege that the vast majority of us (even those of us who can easily recognize all sorts of other privileges) don't see, is the privilege conferred on human animals. In fact, this privilege is rendered so invisible that those of us who do see the anthropocentrism for what it is are usually accused of anthropomorphism. In other words, our world is so human-centric that many cannot recognize other sentient beings as beings in their own right, and dismiss veganism as an attempt to attribute human emotions and characteristics as if those emotions and traits can only be human. It's as if most humans cannot view members of other species but through a human-specific and human-oriented lens. Quite the disability, if you ask me. ;)

My friend veganelder has also been pondering this most peculiar inability, so I would invite you to read here, here, and here.

Oh, because privilege can be hard to think about objectively when you're the one enjoying its benefits, here are a few nifty lists of examples to make it a bit clearer:

So all we need now is for someone to write a 30+ examples of human privilege list. Sadly, it shouldn't be too difficult.

Eek! Where did 2014 go? And wouldn't you know it, one day into the New Year and I'm already behind, snort. I had such good intentions for this blog over the holidays too. Was going to finally write and publish the Why Aren't More Christians Vegan? post that I've been meaning to do for too many months to mention, but then decided that because the topic makes me cranky and the last post had been grim enough, I'd write about vegan gr-attitude instead. Started the draft, and then poof, life intervened. Also wanted to reply to the comments left on the last post of last year (yikes, saying last year makes it sound even worse), but again, life-interruptus and all that.

If I really thought that setting goals for this blog would work, they'd include:

In other words, keep-up mode rather than catch-up mode. But alas, I know myself too well, and promises I likely won't be able to keep I won't make. Plus, the situation may get worse rather than better, so all I can do is say I'll try. Thankfully though, it's Thursday, which means I can make use of #ThrowbackThursday and link back to a post I quite liked and is just as relevant today as it was when written two years ago.  Thus, substitute in your mind the year when reading welcome to 2013, and forgive my tardiness on this and other blogs. And, HAPPY NEW YEAR everyone! :)