# throwback thursday with a twist begins! :)

Because I don't have as much time as I'd like these days but still want to keep posting on a somewhat regular basis, I thought I'd jump on the popular #ThrowbackThursday bandwagon and hitch a ride myself, snort. After all, why not recycle and reuse some of the material I've written over the past five years while I work on new stuff? Besides, it might be fun to look back and see what still resonates.

The twist? Well, not really a twist, but instead of republishing the entire post, I'll likely just link back to it and perhaps provide some additional commentary. This post, for example, will deal with the advantages of being an older vegan. Okay, maybe some of the disadvantages as well. Like this: 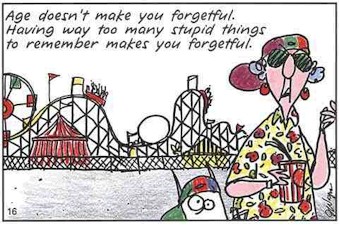 But before you read the holy-crap-that-was-written-back-in-2011? post (and yes, it IS true that when you get older time flies by even faster), I want to add a couple of things. First, while I still agree that reaching out to younger people makes sense and is a good idea, I believe even more strongly that discounting the power and influence of the boomer generation is a bad mistake. For better AND worse, this population demographic still has a big say in how our society operates (for example, they're not willing to think of themselves as old the way previous generations may have, and quite a few of them don't even want to retire), so if we can get this group to say no to animal use and abuse while they still have the political and economic power to make a difference, then we should encourage that as much as possible. 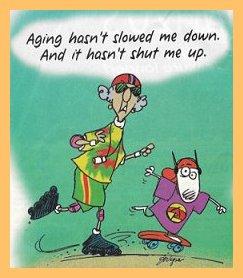 Second, when you get to a certain age, obituaries start to become more interesting and you finally begin to understand why older folk find them so fascinating. You also start to think more in terms of what you've done with your life so far, and what is important for you to accomplish still before kicking that proverbial bucket. And if you're lucky, and finances permit, you may even start planning what vegan and animal rights organizations will inherit whatever you have left. Another reason, I would think, for agencies not to discount the older vegan.

Thirdly, whatever happened with CarpeVegan? They're linked in the original post, but it felt to me that while they started out with a bang, they more or less sputtered out. They still publish occasionally, but the site really didn't take off as I thought it would. Pity.

Finally, I want to take the opportunity here to introduce you to another delightful older vegan (yep, we're everywhere) who is proof that blinders can be removed at any age, and that much good can come of older-generation-vegans spreading the word. So, please say hello to my friend Vegan Grammie Annie!

And, finally finally, it occurred to me during the prepping of this throwback post that revamping old posts can be just as much work and just as time-consuming as composing new material, but hey, anything to get me writing, right? ;)

p.s. in all the excitement don't forget to (re)read all the marvelous and wonderful advantages of being an older vegan

As y'all know, I love Esther, and her two dads, and the fine job the three of them are doing in raising awareness. "The Esther effect" has proven to be strong and far-reaching, and what I particularly like is the positive and joyful approach this trio embodies. One heart at a time is their strategy, and I think it's a smart one. With all the misery that animals face and activists are witness to, it's easy to forget that being vegan should also be fun and life affirming, so it's nice to have Esther and her dads remind us of that. Plus, saying Yes (to life, compassion, love) is, in my opinion, a stronger way to get folk to stay vegan rather than just focusing on the No (to cruelty, suffering, death) in getting them to go vegan.

But what some of you may not know, is that I also like making up words -- as the animal industrial complex shows, language can be manipulated to hide all sorts of evil, and one of our tasks as vegans is to strip away the veil (notice how evil and veil are almost identical) of words that make cruelty invisible -- and Esther has been a rich source of inspiration. Thus, here (in no particular order) are my top favourite five new Esther-inspired words and definitions:

One of my all-time favourite adjectives though is one coined by Esther's dads themselves: Esther-approved (what a creative and gentle way to describe a better way of eating and living!) and confirms for me that these two men deserve all the respect, admiration and attention that they're receiving. May these sweet Canucks stay humble and gracious, and continue to inspire and effect change. Campbellville, here I come! :)