don't know what to do with your money?

As if! I can already hear you saying. But if you do have some extra dollars lying around, then June is a great month to donate. Here are a number of campaigns running right now:

And a campaign close to my heart: Esther! 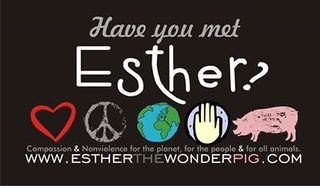 (If any of these don't tickle your fancy, there are sanctuaries, rescue groups and animal shelters in your own area that would be delighted to receive some help.)

Don't know what to do with your time?

Ha, as if! again, right? And truthfully, I don't know of anyone complaining that they have too many hours in their day, and you certainly won't hear that coming from me. Just the opposite, in fact. It's been over a month that I've blogged, and I've missed it terribly. Even though my words probably don't reach that many, or make any kind of dent in the animal use and abuse industries that I despise, the writing of those words is one of the most satisfying things I do, something that puts me in the flow more than anything else.

So why haven't I been flowing more of late? In part because taking care of elderly animals (human and nonhuman) is both time-consuming and tiring, and because I have the bad habit of tackling chores before I do anything else. It's almost as if I'm trying to clear the way of obstacles before I do what I love most. Silly of course, because that means that what matters most gets left to the end and often undone. Obviously, I should tackle what's important to me first!

The elderly animals I mentioned often throw a wrench into my plans as well. My dad (my parents divorced nearly forty years ago) has recently moved into long-term care, but is still experiencing confusion, e.g., dressing himself at 2:00am. He lives about two hours away and I can't visit him often, but a trip is planned for this weekend. My mom is increasingly forgetting the names of things and is resorting to describing them instead, e.g., that place beside the big drugstore, instead of Tim Hortons and Shoppers Drug Mart. As a retired nurse who used to take care of patients with dementia, she is angrily in denial of any symptoms in herself. She has fallen about ten times since her hip replacement, but only remembers falling once. My cat is experiencing "senior moments" herself more frequently, and is taking the expression outside the box a little too litterally, snort. Plus working in a retirement home whose residents are aging can sometimes make me feel that I'm surrounded by beings who are all falling apart. Sad, and frustrating too.

The point of what I'm saying is that time is not on our side, and we have to do what makes us happy, and what we feel to be worthwhile, NOW instead of tomorrow. To that end, I need to be kind to myself and blog, even when I feel guilty for not keeping up enough with other blogs. Another source of guilt I've been wrestling with is that I've neglected my Etsy shop -- my heart just isn't in it anymore. But I've got all this stuff in my overstocked house that I want to get rid of, so luckily, inspiration struck the other day. Since I can't seem to get motivated for myself, why not for my favourite pink pig? Maybe by donating any net proceeds to the Esther campaign for the rest of this month, my enthusiasm will come back. To sum up, time and money are finite, so use wisely. Oink! ;)

The best time to plant a tree was 20 years ago. The next best time is now.
-- Chinese proverb