the 10 rules of vegan living

Ready? Please read, memorize, or print out a copy and put within easy reach.

So, why did I make you read and then discard these lovely rules? Well, essentially, rules schmules! With the exception of rule #10, which I think is helpful enough that maybe it should be required reading for all vegans, I don't normally like articles that feature 7 Steps or 13 Rules or 16 Days or 22 Ways because they tend to be gimmicky, or promise easy solutions to things that are probably fairly complex.

Fourthly (why start with first, second or third?), while all of the above do-and-don't rules are perfectly fine (I try to follow most of them), I know that readers are smart, capable, and more than equipped to come up with their own guidelines for living the vegan life. As long as you stick to the principle of not consuming other sentient beings (rule #1), I trust you'll be able to figure out on your own the best way for you (uniquely wonderful you!) to be the most fabulous vegan you can possibly be. Yes? No?

Q: how many pigs does it take to change the world? 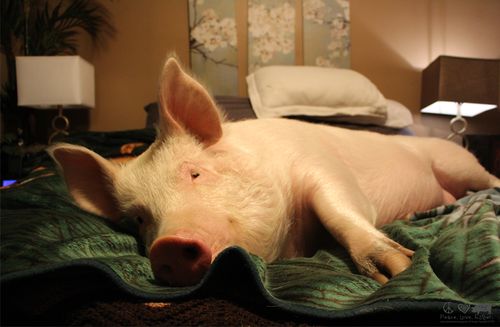 At least, it took only one to change the world for guardians Steve and Derek, and in the process, Esther the Wonder Pig is continuing to change the worlds of numerous folk who follow her adventure. Not surprising, not only because Esther is just so darn cute, but because human animals seem hardwired to like a) stories, and b) specifics.

Yes, data and facts are important, but throw in a great narrative and we're much more likely to remember and respond to the material. Make the subject of the story a hero (especially animals defying human injustice) and you've got your audience's attention. Finally, make the story about a living being we can relate to (wouldn't each of us try to escape slaughter?) instead of an object that the ag death squads keep trying to turn animals into, and we're really hooked. We like stories, and why not?

As for numbers, even though billions of sentient beings suffer and die, the word billions doesn't seem to give us puny humans enough details. And that makes sense actually. Isn't $549.36 easier to comprehend than $1,000,000? Even in a mere million all those zeroes give us exactly nothing to grasp onto, which is why telling the story of one individual is often more effective than talking about billions of beings. We can't see the faces of that many, can't know the names, and can't follow a heartbreaking or heartwarming tale when too many are included. No wonder that even meat-eating omnivores may cheer on an individual pig or cow or chicken who has managed to escape the clutches of their otherwise familiar fate. We can and do relate to individuals and individual stories of chutzpah.

So on to the story of Esther, the 450lb "mini-pig" who's changing the world. She's become a celebrity, and you've probably heard of her already, but the exciting part is that the couple who adopted her, the couple whose world changed completely, is now trying to change more lives and more worlds by starting a sanctuary. Right here in Ontario -- yes! So let's just have Steve and Derek tell their tale, while I continue to tell you why I'm so pleased. First, a sanctuary. Always a good thing because the more rescued animals who can live out their lives in peace and safety, the better. Restitution, as I believe veganelder would call it. Second, in my province, woot. There are lots of famous sanctuaries and rescues south of the border, but I'll never step across, so it would be fabulous to have more places closer to home. Third, the guardians of Esther are a gay couple, so not only will they show that animal beings are part of the larger Family, they'll demonstrate that all kinds of human families make the world go round and that love and devotion are what counts, not blind allegiance to more traditional models of family. They're a world-changing couple in more ways than one. Finally, and most importantly, Esther the Wonder Pig!

So check out the campaign. Spread the story, and if you're able, please contribute financially. You could do it for yourself, or as a gift on behalf of a favourite mother for Mother's Day. Just think, if 100 readers donated $10, that would be a grand already. Now wouldn't that be just grand! :) 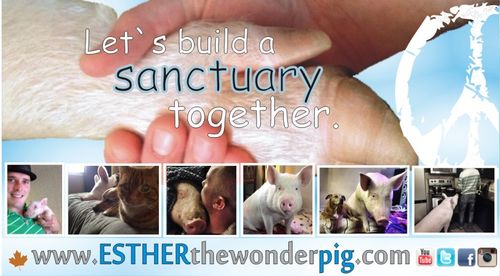