how do you decide what organizations to give to?

If you're like me, your inbox has been overflowing of late with requests for donations. Understandable, given that this is the traditional time of year for charitable giving. But why ask over and over when I've already heard your plea the first time? Again, understandable that you keep prompting me if I haven't already responded, but perhaps I've planned a certain time to attend to donation requests. I also find it a teensy bit annoying when I've already donated at the beginning or in the middle of the year, or worse, am already donating on a monthly basis. Please, don't ask me again I feel like telling certain organizations, or you may be at risk of putting me off entirely.

Long before I went vegan, I tackled the question of what charities to give to by deciding I wouldn't donate to those that many people donate to already. Standard causes like cancer and heart disease had no difficulty gaining sympathy and dollars I figured, so I chose to support causes a bit more off the beaten path. Organizations like Kids Help (they provide telephone counselling for children and teenagers) appealed to me, as did World Society for the Protection of Animals and International Fund for Animal Welfare.

At some point, most of my donation dollars went to organizations focusing on helping non-human animals, but I wanted to be a bit more selective. I want my dollar to have the most bang for the buck, and when I found out that certain animal welfare charities paid their executive directors fairly huge salaries and spent an enormous amount on administration and marketing (you can check this by perusing annual financial reports), their names got crossed off my donation list. I want most of my dollars to go directly to saving animals instead of paying for a human's salary.

But the question remains: Which organizations do you support when you have little to give and there are so many asking? These days I like to donate to organizations that are information focused, whether through pamphlets or undercover investigative videos. Anything that can reach more people and fundamentally change more behaviour that has a direct impact on animal lives is a good investment I believe.

Donating more locally is also appealing, so I was thrilled when Mercy for Animals opened a sister office right here in Canada. I'm also getting interested in supporting more novel ways of helping animals, and want to check out creative projects on places like Kickstarter and Crowdfunding. Finally, sponsoring individual beings in sanctuaries and other rescue operations is something I'm aiming for next year.

But because this year is practically over (eek, a few more hours to go, so Happy New Year's everyone!), I'd better scurry along and respond to those desperate pleas in my inbox already. ;)

what Christmas is all about 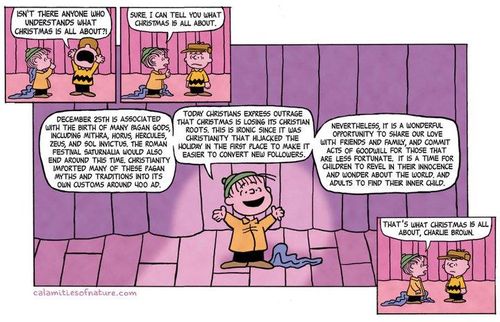 That's some (modified) speech, snort. Have to admit that A Charlie Brown Christmas is one of my favourite shows of the season, and the one I make sure not to miss. As relevant now as it was in '65 (though hard to imagine that commercialization was as rampant back then), it offers a great message no matter what your beliefs.

Veganism, for most vegans I hope, is about fighting commodification of sentient beings. We disagree with the notion that other species (including our own) are objects for human animals to use, own or destroy. And at a time of year when consumption as celebration is all around us, it seems even more fitting to remember that consuming other animals in whatever form is wrong no matter what month we happen to be in.

It's always a good time though to put into practice what Linus (reciting the Gospel of Luke Ch2 v14) said at the end: "...and on earth peace and goodwill towards men [sic] [recte ALL]."

May peace and goodwill to all rule all of our hearts and actions.