my temptation with eggs

So here's what happened.

Of course I know eggs are cruel. This is why I haven't bought or consumed them for over four years, and am careful to check ingredients to make sure that egg isn't included. But eggs were the last and hardest thing for me to give up (dairy? cheese? meat? no problem!) and the one item I actually missed.

Fast forward four years and I'm at my uncle's place discussing eggs and the awful reality of factory farming while admiring the beautiful chickens that seem to be quite content as we walk among them. They're busy taking dust baths, and conversing with each other and clearly not afraid of this man who seems to be taking good care of them. Lots of space to move around, an enclosure to protect them from the elements (the coop is closed at night for predators), perches galore, water and food. My uncle is quite proud that he treats the birds well, and that he doesn't force them to lay the eggs he takes. Eggs, as he rightly points out, that are usually produced under horrible conditions because people want them cheaply. Eggs that he gives with me because he understands why I protest commercial eggs and how animals are treated and used.

And I have to admit that I take the eggs home. Put them in my fridge and think of how much I have missed soft-boiled eggs (I know, even the thought is revolting to many of you!), and imagine being able to eat one of these brown beauties. They stay in my fridge for a few days, tempting me every time I open the door, and I confess to wanting to eat them. I think about how the chickens don't seem to mind the eggs being taken, about how they're clearly cared for, and about how if I was ever able to rescue chickens and let them live out their natural lives unencumbered that surely they wouldn't mind me taking a few eggs (I wouldn't if I noticed them becoming upset) in exchange for their upkeep, so to speak? I even email a friend as I continue to hem and haw.

But then I remember asking my uncle what eventually happens to these delightful birds, and him admitting that they go into the soup pot. After only about two years. Two! And then I also remember walking into a barn and seeing the cutest little rabbits and for a fleeting moment thinking they were pets before realizing they probably were being raised for meat, and I know what I have to do. The eggs go to my mom's fridge (at age 85 she puts up with my "craziness" but most certainly isn't willing to give up animal products herself) and I let my uncle know thanks, but no thanks. Because what kind of message would I be giving him? And what of my resolution not to be a participant in this animal-dismissing madness?

Still miss eggs though, so what does this former egg-lover do? Gets on her computer and orders herself three packets of Vegg

and now happily dips her toast in soft yellow goop without any of the guilt, snort. Plus, even though scrambled eggs were never my thing before, I now absolutely love mixing Vegg with scrambled medium-firm tofu -- yum!

But this whole incident also got me thinking about the pressures and expectations of being vegan, and of ex-vegans as well. What would have happened had I given in to temptation? Would that have undone everything I have tried to do these last four years? Would I have been stripped of my vegan title? And by whom? Is temptation itself enough to render one no longer vegan? Would posting about it have been folly? Is posting about even being tempted foolish? And is it possible that some vegans become ex-vegan because they feel they shouldn't slip up even once? That even one mistake is so bad they'll be crucified by other vegans? (Odd, by the way, given that veganism is supposed to be about compassion.) That if you can't be "perfect" you might as well give up completely and revert to your carnivorous ways? What do you think?

It's bad enough that your neighbours to the north were foolish enough to re-elect Stephen--Dictator--Harper with the result that Canada is no longer a real democracy, but the thought of North America in the hands of both Harper AND Romney (and Ryan) fills me with dread. If you care about human rights more than corporate entitlement, believe a fully-formed adult woman automatically has greater claim to legal status than an unformed fetus-to-be, believe that evolution and climate change are not figments of the imagination, are not scared witless by the thought of two consenting adults of the same sex endorsing an institution that currently wants no part of them (I don't believe in marriage myself, but do feel that everyone should have the right to make that particular mistake choice) and above all are of the opinion that strapping a dog crate on top of a fast-moving vehicle for 12 hours is just one example of a completely screwed up way of viewing and treating other sentient beings, then PLEASE vote on Tuesday, and vote wisely.

Because in a globalized world like ours, it's no longer just America at stake. 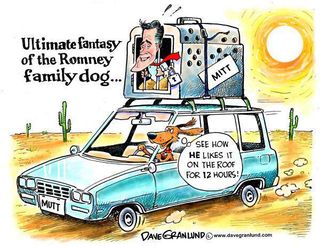