got milk? go wean yourself already!

No doubt you've heard about the latest undercover investigation uncovering familiar dairy cow slaughter cruelty (the details might change but the unending horror doesn't), and since Provoked and These Glass Walls have covered it better than I could, I won't add more here. Naturally it depressed the hell out of me, so I decided to express my frustration at Cafe Press and came up with this custom-designed (okay, logo only) slightly cheeky (I so mean a stronger word than wean, snort) women's tee: 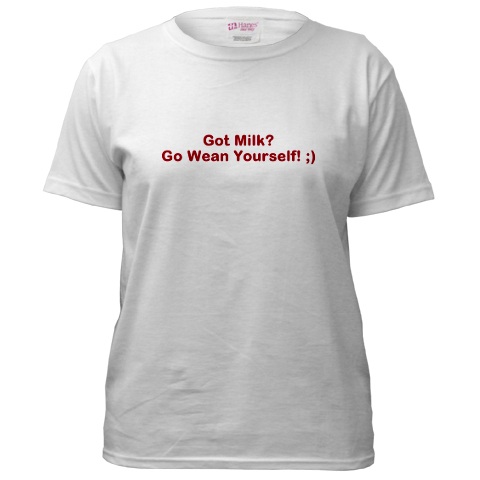 Hmmm, maybe I SHOULD pop in a suitable graphic, a ©, and run a little tee shop! :)

I believe in testing make-up on animals... 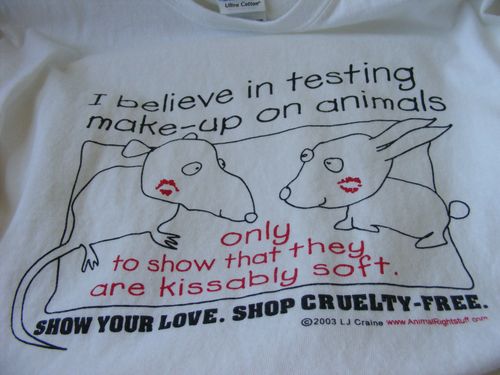 ... only to show that they are kissably soft. Indeed.

Another one of my tees I've been sporting this summer that has gotten a good response. I think most people feel that they love animals, and if you start from a position they're likely to agree with, then it's easier to continue the discussion from there.

I even wore this to a staff meeting the other day (in direct defiance of the dress code which doesn't permit "clothing with slogans, pictures or drawings" -- hey, if I have to haul myself into work on my day off then I'm going to wear whatever I want, snort), and had two elderly residents read and comment on my attire. This led to my "actually, I'm vegan" confession and an interesting discussion arose with one of them, which goes to show that even nursing homes can be a great place for T-shirt activism!

it's a mammary mad world

Boobs are weird. Well, what I mean to say is that how society views women's breasts is completely cockeyed. Yes, they can be a source of pleasure (both for a woman herself and her chosen partners), but when it comes to their most important biological function we quickly enter taboo territory. Breastfeeding? Okay, but preferably not visibly, and most certainly not in public. Breastfeed for more than 6-12 months? Hmmm, that's too controversial* because what are breasts actually for?

They can be ogled, Googled (ha, now I get where they REALLY got their name from), fetishized (where would the porn industry be without them?), altered (because it's only natural to surgically insert foreign materials into your body when it's not necessary), displayed in almost any setting (I somehow doubt that female professionals in the real world would be taken as seriously if they showed their jugs as generously [notice how many breast euphemisms there are?] as in TV drama-land, for example), marketed to pre-pubescent girls (do you really need a bra when you're only seven?), and even turned into a hugely profitable health industry (why are breast cancer victims discouraged from questioning dietary and environmental factors?), but what they're NOT supposed to do is provide nourishment.

Nope, take your babe off the boob! Much better to start drinking cow's milk (a whole other sad story of female victimization) and stop only until we fall into our graves. Um, what the hell? 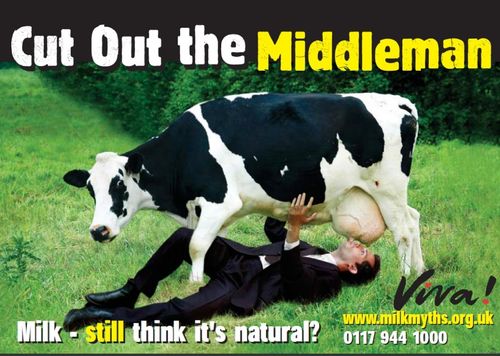 *This post was inspired by a reference I heard last night to Alanis Morissette's decision to keep breastfeeding her 17-month-old son until he tells her he wants to stop.