One hour. One measly little hour. This one hour translates to 1/24th of your day, 1/168th of your week, and 1/8760th of your year (if my calculations are correct, snort). Earth Hour will be celebrated from 8:30 to 9:30pm on Saturday, March 31, 2012. Please take this time to show a little love for this lovely planet we're allowed to live on, the ultimate mother of us all, in a way. Think about how we treat our hostess, all her other guests, and give thought as to whether our manners could improve. ;)

Act as if what you do makes a difference. It does. --WILLIAM JAMES

make your vegan goals SMART ones 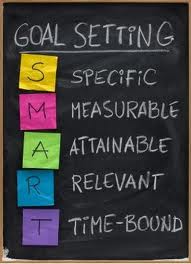 Resolutions, as I briefly mentioned back in January, are related to, but different from, goals. An easy way to differentiate between the two is to think of resolutions as wishes and goals as plans. And while the ultimate goal of veganism is animal liberation (or is that more of a resolution?), every vegan has (or should have) their own set of goals towards achieving this. So why not make those goals SMART or even SMARTER?

I'll stick with the SMART acronym for now (although I like the idea of also making goals E = enjoyable and R = rewarding), and for the purposes of this post it stands for:
S = specific, M = measurable, A = achievable, R = realistic, and T = time-based.

For example, let's say that I want to work on one of my original goals from 2011 and blog more frequently. Using the SMART method, I could state this goal as follows:

This goal would now be specific, measurable, achievable (if the prolific James McWilliams--excellent blogger and writer by the way--can pump out a post daily, surely I can do it at least once a week?), realistic, time-based, and hopefully also enjoyable and rewarding. Now I realize that my little blog won't do much for animal liberation overall, but I think this SMART method is great for accomplishing all sorts of vegan goals e.g., increasing the distribution of vegan literature, trying other methods of outreach, deciding what and how many organizations to support financially, and any number of other vegan objectives.

Remember all the things I wanted to see more of in my veganpreneur post? Well, someone asked if I had tried any of those ideas yet, and as I would love to edit a vegan anthology one day, perhaps I'll make that one of my future goals. So what about you? What would you like to be SMARTER about? :)

Well, not quite. After having found my groove again (snort, thanks veganelder), I ended up working full-time for a spell (debating whether I should fight the flu shot requirement or not) and didn't have the energy to blog, or do anything particularly useful for other animals. But today is the first day of Spring, yay, so I hope to be back in action soon. In the meantime, here are some other dates to keep in mind this week:

March 23: One Life -- although not a vegan documentary, I'm always hopeful that films of the Planet Earth genre will at least inspire more respect for other species

Also, for any Canadian reader interested in working with an animal sanctuary, there's an Executive Director position available with the Donkey Sanctuary of Canada main farm in Puslinch, Ontario. I would encourage you to apply! :)

In a comment on my previous top ten carnist phrases/excuses that drive me crazy post, I mentioned that I might compile a vegan list as well, so here goes. The Top Ten Reasons to go vegan are:

There you go, my hand-picked top ten, snort. I included reasons 11-15, but really, they could easily be thought of as benefits primarily for human animals as opposed to reasons per se. Because what struck me as I was Googling top ten lists was how many did not have animals at the TOP of their list. Human concerns such as living longer, better, healthier and even sexier, for Pete's sake, seemed to crowd out concern for other sentient beings. Well, as nice as those things may be, they're not the primary reason I became vegan. For me, it's all about the top ten. Okay, I can see why these lists would be put together the way they are to entice others to join the fold, but we know better, eh? ;)

Speaking of crazy, is it true that Melanie Joy is now being considered a "new welfarist" by some abolitionists after having written An Introduction to Carnism

? I haven't read it myself yet, but that would seem like a stretch. Even if the main focus of animal use in her book is on eating meat, surely it's recognized that while she's dealing with one form of speciesism, she's not denying there are others? Anyway, Top Ten, take it away!

Top Ten Carnist Phrases Or Excuses That Drive Me Crazy:

10. "I respect your personal choice, so you have to respect mine."

9.  "But what would happen to all the animals otherwise?"

8.  "It's not natural because you have to supplement with vitamin B12."

6.  "Our brains wouldn't have gotten so big without meat."

Obviously there are more than ten annoying excuses and phrases and no doubt you have your own favourites (let us know in the comments!), but the above ten seem to rankle me the most. Or at least, the quickest. The last two in particular really bother me because they're lazy clichés that folk frequently spew out to justify their habits so that they don't have to spend any real time contemplating why they do what they do.

For a complete dismantling of the above lame phrases and excuses (plus many more) check out Vegan Poet's comprehensive responses to typical comments so that you'll always know how to reply to those still not vegan yet. I'd do it myself, but I'm lazy too. ;)