not vegan yet? then please view farm to fridge

by Norm Phelps as I think the adage of "to know where you're going you have to know where you've been" is so true. And because reading about the long history of humans treating other sentient beings badly (which is an understatement if ever there was one) was depressing even if informative, I snuck a peek at the conclusion to see if he would at least be able to end on a cheerier note. Well, encouraging is probably a better adjective, so here are his last two paragraphs:

For more than 2,500 years--since the days of Lord Mahavira, the Buddha, the later Prophets, and Pythagoras--men and women of compassion and goodwill have sustained the struggle for a world in which no sensitive being is imprisoned, enslaved, tortured, or killed simply because it suited humankind to do so. And the end of that struggle is not yet in sight. Today, we still face the same twofold challenge that has existed since the Axial Age: first and foremost, to bring closer the day when all sentient beings will live securely in a world without cruelty; and in the meantime, to relieve as much suffering as we are able.

Our strategy, therefore, must be to accomplish the possible while inspiring those who will come after us to achieve the impossible. We must dream the impossible dream and broadcast that dream so that every year, every decade, every generation, there are more and more of us who share it. All the while, we must never retreat from doing what we can. To abandon either the dream or the work is to abandon the animals, because it is this union of the impossible dream with the possible work that will bring success. Nothing else will. At some time that we cannot yet see, the dream and the work will merge, brought into reality by generations of dedicated dreamers and workers, and the animals will be freed forever from what George Orwell's philospher pig called by its true name: "the tyranny of human beings." p. 310

Amen, brother! If, like me, the negative reaction of those who don't get it yet and the seemingly monumental task ahead of us sometimes discourages you, I think these are good words to keep in mind. Other books if you're interested in exploring vegan and animal rights history while trying to keep your eyes on the better future ahead include: A Vegan History: 1944-2010

by Erik Marcus (Kindle Edition) and For the Prevention of Cruelty: The History and Legacy of Animal Rights Activism in the United States

Had never heard of him until The Vegan Spyder sent me a Flickr message one day saying, hey, check this out:

Turns out it was pretty funny and John certainly has a unique voice/style to add to the vegan choir. Then on Provoked I saw this brilliant piece and was really impressed:

So thanks to both my pals for introducing me to this cool Canuck (slang for Canadian), and be sure to check out his other works. I know I certainly will! :)

Update: As it turns out, YouTube decided that the work of vegan activist John Sakars was in violation of its Community Guidelines whereas the numerous animal crush videos and other videos celebrating hunting, dogs being barbecued, people tossing live goats to lions in Chinese zoos for entertainment and all other manner of sick crap is, well, perfectly fine. And yes, some may find a few of John's videos too crude for their taste, but really? Actual violence against animals is okay, but speaking out against said violence is not? But that, my friends, is where YouTube stands. So, YouTube terminated John's original account, but he has uploaded 25 videos to his new one (from where I uploaded the Vegan Marriage Counsellor above), and he can always be found on Facebook.

Q: How many vegans does it take to change an omnivore's mind?

A: Only one. But which vegan will it be?

A: None. The omnivore needs to change it themselves.

A: Fewer than the number it takes to change a Francionist's mind, snort.

A: No idea. But what did you do with the lightbulb?

Yes, I can hear you groaning right through my computer screen! So please salvage sad joke by submitting your own line. ;)

remembering all beings who mother 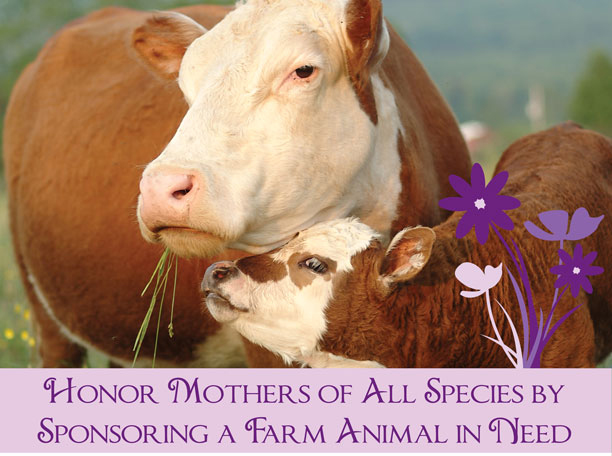 Lots of excellent posts out there for Mother's Day examining various aspects of the mother-child bond regardless of species, so I won't add much more except to ponder out loud if greater or faster change would occur if larger numbers of human mothers got involved. After all, they (along with human fathers) have the biggest impact on families in terms of what's regarded as food to begin with, what gets purchased and prepared, what entertainment and other forms of current exploitation are deemed suitable, and are the most effective transmitters of personal value systems when children are young. So maybe if collectively more human mothers were up in arms (like Mothers Against Drunk Drivers for example) about how we treat and use animals, then perhaps this world will become a different place sooner rather than later.

In other words, we need Meatless Mothers more than Meatless Mondays! ;)

As I nervously await the results of Canada's federal election today (if you're Canadian and haven't voted yet please read Shit Harper Did and go vote!), I thought I'd check out political parties that specifically represent animal rights. I actually wasn't aware that there were any until I started seeing Party for the Animals badges on other blogs. They've got tons of information on their website, including what you can do to help.

In Canada we have the Animal Alliance Environment Voters Party of Canada (which I hadn't heard of before), Animals Count in the UK, The Animal Protection Party in England, the Animal Welfare Party of Germany, the Animal Justice Party of Australia, Partito Animalista Italiano of Italy, Spain's Party Against Bullfighting, Cruelty and Mistreatment to Animals and the Animal Rights Party USA modeled after the Dutch Party for the Animals mentioned above. Wow! Now admittedly not all parties may be currently active, but it's heartening to see different regions of the world determined to make a political impact in support of animal beings.

And I think the key IS making animal rights a global affair. Apparently a staggering two billion people (2!) watched Kate and William get hitched (in comparison to about 750 million who watched the doomed Diana and Charles ceremony), so can you imagine if approximately one-third of the world's population were to actively get involved with something as important as how we treat each other?

As for the election occurring today, I find the fact that Canada and the US don't have proportional representation bizarre, embarrassing, undemocratic and just plain stupid. I mean, if smaller countries can at least get this right, why can't we?

Update: So bummed out about Harper's Conservative majority. It's a huge loss for anyone concerned about animals, people, the environment, democracy and social justice. And it makes me discouraged about veganism because if Canadian voters don't even give a crap about the human species, then where does that leave all the others? :(