KJ the veganizer interrupts this blog... 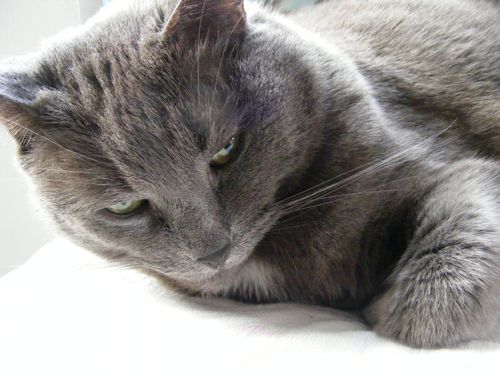 ...to wish you Happy Holidays. Okay, I interrupted her nap probably, but she went right back to sleep, snort. I plan to be back before this year is over (where did it go?!), with hopefully either paradox #3, vegan resolutions, a wish list, questions about what animal rights organizations to donate to, or my tale of the last supper. So stay tuned.

And yes, Kazumi Joy played a role in the story of How it took 46 years to go vegan "overnight", which I'll relay some day...

the paradox of being vegan part 2

Note: the paradoxes of being vegan that I discuss in this and other posts are my own personal observations, and not necessarily universally applicable to all vegans

I'm at peace because what I consume is in line with my moral and ethical values. For the most part (keeping in mind the two important words "possible" and "practical" from the veganism definition), I do not eat, wear, or use animals/animal products, and try to encourage others to do the same. As much as I can, I attempt to follow the adage of "first, do no harm", and vote with my fork and wallet every day. While it may not seem like enough, at least I can rest more easily (even if I didn't participate in any other form of activism) knowing that I do my best not to contribute any further to animal harm and exploitation.

But while I personally feel more at peace, I have also never felt angrier. As a vegan, I probably don't even have to explain this, and I assume that most of you know exactly what I'm talking about. Part of the process of becoming vegan is learning to see the world with new (or perhaps it would be more accurate to say opened) eyes and becoming aware of and being witness to the cruelty and injustice that nonhuman animals face daily and worldwide can be overwhelming. There is so much to be pissed off about! Animal use is so pervasive and ingrained and virtually no individual, group, society, institution or corporation is blameless. We can even become angry with other vegans or vegan groups that we feel aren't tackling the issues in the ways we would like, or in the ways we find most effective. And I think that while anger can be an extremely useful tool and a vehicle for change, it's also exhausting. For myself I've come to realize that I have to find ways to channel that anger more effectively because I don't think increased blood pressure and stress (as just two physical manifestations) will make me or anyone else a better activist.

How about you? How do you straddle trying to be more compassionate towards ALL living creatures when some of those creatures piss you off the most? ;)

p.s. in case you haven't read it yet, here's the paradox of being vegan part 1