turkeys belong in fields, not on plates 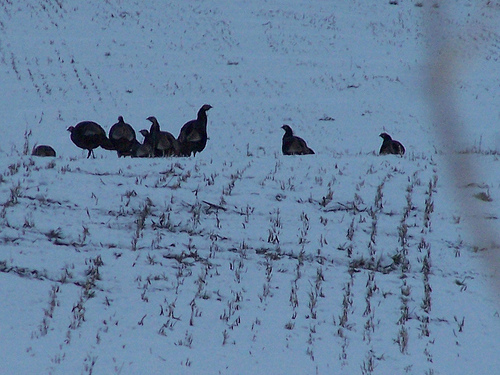 Today is Thanksgiving Day in Canada, and while I do have much to be thankful for, since becoming vegan this holiday tends to make me sad rather than grateful. The lovely photo above (taken by my Flickr friend Spyder Venym) shows turkeys as they should be: alive, wild, together, outside, and doing whatever they feel like doing. Instead, turkeys are on countless plates all over the country today (I don't have to tell you what misery they suffered before/during their deaths) and it breaks my heart. 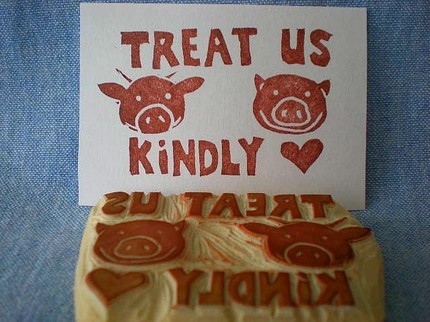 Got this cute little stamp off of Etsy a while back. She has a whole shop full,
but here are some more of StudioMo's animal stamps.

It wasn't planned, but by coincidence this happens to be my 95th post, so I think it highly appropriate to be reviewing one of my favourite animal rights books today: Ninety-Five: Meeting America's Farmed Animals in Stories and Photographs

As the subtitle of the book says, Ninety-Five is about meeting America's farmed animals in stories and photographs, and what photographs and stories they are! The photos are gorgeous, and besides being a visual feast for the eye, they are illuminating for folk like me who have never seen most animal species in real life. And that, I think, is one of the saddest facts: people who regularly dine on chickens, cows and turkeys (Thanksgiving is celebrated here in Canada next weekend) are probably more familiar with what the animals they're eating used to look like from the packaging, than from what they've seen in real life. Justice, on the front cover for example, is beautiful, and I was quite amazed to see tufts of hair on his back, and that's how far removed I am from the reality of real animals.

I loved reading the stories of all these rescued animals and when I brought this book over to show my parents (at ages 83 and 94, these two are unfortunately not prepared to give up their meat-eating ways) I kind of had to laugh (even though it was sad) when what struck them the most was that all the featured nonhuman animals had names. For them the primary purpose of these beings is to be eaten, so naming them seemed foreign. But that's exactly what I love about this book: it gives names and faces to those that we are used to--and here is where I get stuck with language because really, the most appropriate word to use is dehumanizing. One of the ways we distance ourselves from other species is by using the terms humans and animals, but even human animals and nonhuman animals still puts the human animal as the norm and treats nonhuman animals as deviations from that.

But what I'm really trying to say here is that we're so used to objectifying other species and stripping them of their sentient features, that this book is a contrast and a welcome relief. It does the opposite and reintroduces us to who our fellow creatures are, which is so important when trying to convince others that veganism is the way to go. After all, what good is focusing on the horrors of factory farming and other animal use/abuse when most of us don't even know who the victims are? I'm not saying those other books aren't valuable in their own right, but I think this one does a great job of showing who we're actually slaughtering and makes us more aware that the meat (another distancing term  I hate) we're eating had a name and a face.

I keep this book on my desk as a daily visual reminder of why I'm vegan, and wish I could donate a copy to every library and every school because it's just that good.

Oh, nearly forgot, the title Ninety-Five refers to the estimated average number of animals said to be spared annually by one person's vegan diet. And because I'm actually not that good at writing book reviews, here is a much better one. (Thankfully I wrote mine before finding his otherwise this might have been a one-line post, snort.)