why Mad Men gives me hope

For those of you not familiar with this excellent show, Mad Men is a drama set in the advertising world of the 1960s. Smart, stylish, wonderfully acted, and with a pace that tends to emphasize character over action, this series is notable for capturing the sexism, racism and homophobia of that era. Also striking are the commonplace behaviours that can come across as shocking to today's viewers. Seeing a pregnant woman smoke and drink is jarring to say the least. In fact, the copious amounts of smoking and drinking by almost all characters both at home and in the workplace is a reminder of how much things have changed.

But my favourite example so far of change in public attitude is through an episode where the main characters go on a lovely picnic in a pristine park, and upon leaving shake out their blanket and leave the garbage behind on the grass. I cannot tell you how jaw dropping this incident was, but the huge number of comments this little snippet in the episode garnered all across the Internet tells me that a lot of people were aghast. And that shows how much attitudes can change over a relatively short period of time. Public littering, while still done, is not considered proper behaviour anymore, and that value, even if it doesn't always translate into behaviour, has been pretty much ingrained into our consciousness by now.

So I'm sure you can see where I'm going with this. Mad Men demonstrates that collectively we have changed in how we view and treat each other. Yes, sexism, racism, homophobia and environmental abuse are still problems, but at least they're recognized as being problems, and I'm confident that one day future generations will be just as appalled at how badly we used to treat animals as well. 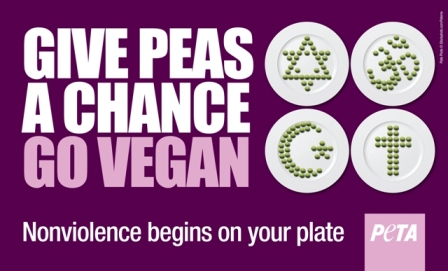 I know some of you have seen this billboard ad for PETA on Vegan Soapbox or elsewhere, but I liked it so much that I wanted to post it here too. I've been meaning to do a few posts on the relationship between veganism and Christianity (and other religious faiths), because I think this is really important to address. And if nothing else, being able to tap into this segment of the population should not be ignored from a strategic point of view. Do I sound like a marketer? Snort. But yeah, expect this, plus the posts I still have planned on statistics, the paradox of being vegan, a review of the book Ninety-Five, and my series on what it means to be vegan. Whew! That'll be a lot of reading and writing. ;)

trying to be cruelty-free continued

As I was saying in my last post, I try to be cruelty-free. But it isn't always easy, or even straightforward. It's helpful to see the bunny logo to ensure products haven't been tested on animals, but otherwise you have to be careful that testing wasn't excluded on the final product only, instead of all the ingredients. I love it when I see the word vegan right on the label because even 100% vegetarian is no guarantee that there aren't any animal ingredients included. You can't even count on brand names. For example, I picked up a Jason's lip balm the other day without checking because I already had their lotion and shampoo, and sure enough, I got home and discovered it had beeswax! It's vegetarian, but not vegan. I didn't throw it out though because it was an honest mistake, and I'm not in a position to throw money away. So, I have to remind myself to check ingredients carefully.

But even then, you're not out of the woods. Take my Silk soy beverage for coffee--it's delicious, and I wouldn't be able to drink my coffee without it. And it's also completely vegan, but WhiteWave, who happens to be a dairy company, owns it. Yep, ultimately my money is going to a company that's part of an industry I despise. Tom's of Maine? Also vegan, but a subsidiary company whose parent company is Colgate-Palmolive--a company heavily involved in animal testing. Earth Balance? Well, it contains palm oil (as does the Silk soy beverage and lots of other foods) an ingredient associated with clear cutting rainforests, and that of course has negative impacts on the environment and non-human species like orangutans. Yikes!

So what's a vegan to do? Simply the best they can given the circumstances. I strive to avoid the obvious and worst offenders in terms of ingredients, but I'm not a scientist, I don't have all the ingredients memorized, and while I might not like certain parent companies, I sometimes think that because profit is the only thing they care about; realizing that vegan products are in big demand may not be such a bad thing after all.

trying to be cruelty-free 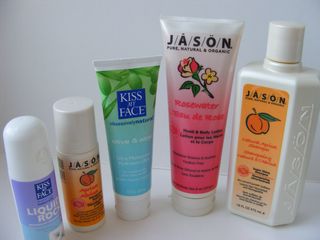 Like most vegans, I do my best to be cruelty-free. That includes buying products not tested on animals, and without animal ingredients. So far, I have found soap, lotion and shampoo that I like, but finding a vegan deodorant that I like just as well has thus far been elusive. The two in the photo did not work for me, and at $6 each, I don't want to have to keep experimenting. In frustration I ended up buying a bottle of Arrid again (bad, I know!), so do you have any recommendations?